When starting the game, you will play a short tutorial that explains the basics, and cannot be replayed. The content listed below will guide you through the rest of the game. 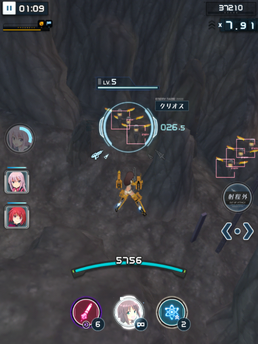 Combat & Movement is one of the basic part of the game. For full info, read the summarized guide given below.

Movement: To move, drag your finger a short distance in the direction you want to go. Release to stop. You can normally only move left, right, forwards and backwards. 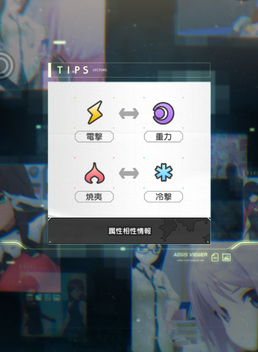 Elements is a big part of the combat system. There are four elements: Frost, Electric, Gravity and Heat

Actress, Gear, and most enemies each have their own element. Using Actress and Gear of an element that is strong against an enemy's gives you attack and armor bonuses:

Note that your actresses have this advantage while the normal enemies don't. What this means is that, for example, while you get bonus damage hitting Gravity-based enemies with Electric Actress and Gear, the Gravity-based enemies doesn't get bonus damage hitting an Electric-based Actress. Bosses do have this advantage however. While targeting, the game will show you what element the enemy is weak against.

This system will become important as you progress through the game. Late game stages and especially harder multiplayer stages require chosing the right element. 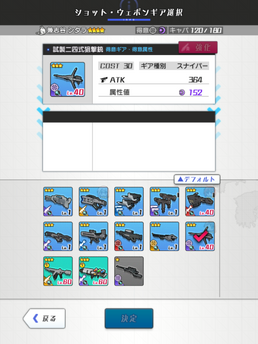 Equipment (known in-game as Gear) are armor and weapons used by Actress. They can be obtained from analyzing shells, the medal shop and map rewards.

Each actress has its own prefered weapon and gains bonus damage when using it (i.e: using rifle Gear on Yotsuyu Hirasaka will give you bonus damages as she specializes on rifles). Gear has a rarity system that ranges from 1☆ to 4☆. Each rarity has a Max level cap:

4☆ Gear can't be obtained from shells; only by upgrading 3☆ Gear using materials in the Gear Maintenance room. Each Gear also has an element and gives bonus when equiped by an Actress of the same element. (i.e: gravity sniper weapons give Sitara Kaneshiya big bonus damage as she specializes in sniper weapons and is a gravity element). 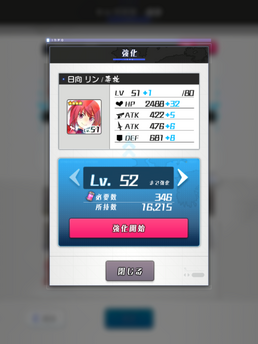 Leveling is an essiental part of Alice Gear Aegis. The fastest way to level up an Actress is by using Anima, which can be obtained from clearing maps, as a reward or from analyzing shells. Your Anima meter is displayed alongside the Gold meter at the top of the screen in the Office room.

You can level up using Anima in the Team Management screen. Click on an Actress and tap the small red button on the right of her name (you also can tap the button under the Actress' icon in the Character List screen).

The best way to grind Anima is by completing Anima Quest (rotates through the week), Survey maps and from shells. For 4☆ shells, it's recommended to grind in Multiplayer. 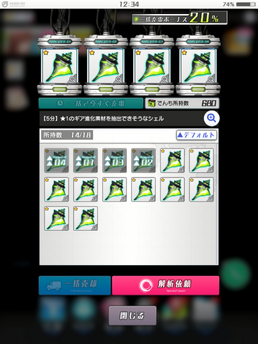 Shell Analysis is the room where you can exchange the shells to reward. Each shells dropped has its own category and also has a rarity system that ranges from 1☆ to 4☆. Some event items that doesn't even look like shells can be used in the Shell Analysis. (i.e. the medal boxes obtained from Frame Arms Girl multiplayer event)

Currently, there are Anima, Gold, Gear, Materials, Rainbow shells in the game. Each time you analyzing shells, you have to wait for a certain time until you can analyzing again. How long it will take depends on the rarity of the shell you've used as listed below.

You can skipped the time by using Battery. Batteries are items that can be obtained within mission tasks, hex, and events. Battery are hard to grind and mostly obtained only from a couple of missions. So it's recommended to save batteries if not needed for future use.

The best way to grind shells is by clearing multiplayer missions. The higher the difficulty the better the shell rewards. Currently, the rarest shell that can be obtained is the Rainbow shell as it gives strong Gears when analyzed. The shell analysis storage is also limited, so make sure to analyze shells often to have room for new shells. You are also able to sell all the shells for Scout Points by tapping the blue truck button. Only do this if you want to clear up unused shells. 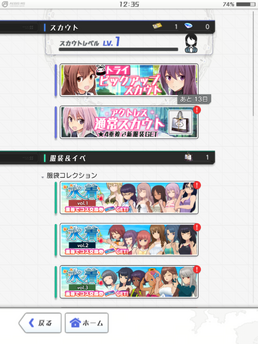 Gacha Scouting (refered as "Scout" in-game) is the room where you will roll to get new actresses and hoping for a 4☆ actress to come out. It's recommended to only do a 10x roll as it has a higher chance of getting high rarity actresses. (You also get one extra actress on top of it)

Each gacha rooms has its own 4☆ rate, so make sure to think first where you will spend your Scout Tickets or Carat. You can only obtain Scout Tickets by getting enough Scout Points. (100 Scout Point will automatically turned into one Scout Ticket. Which means you need about 1,000 Scout Points to be able to do the 10x roll in a gacha roll.) While for Carat, you can only buy them using real money.

The best way to grind Scout Points is by doing events, main story, bingo and missions. Make sure to prepare yourself when doing gacha as it's very salty to begin with, and if you fail, just keep trying! 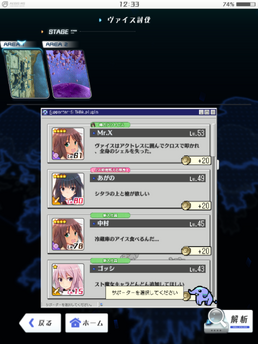 Support are other players' actresses that will help you out in battle when you are going to a mission, event and normal surveys. (except multiplayer) You also can choose not to have support by scrolling to the bottom of the list and select the tab with no actress image on it.

Using a player support will gives that player 20 golds, while using friend supports will gives your friend 100 golds instead. In battle, to activate the support, you needed to tap the actress icon represent your support at the middle left of the screen. (above your team's icons)

Unlike switching your actress during battles, it will summon the support actress and helps you for a certain of time instead. They will use their special skill always at the end when their time runs out. 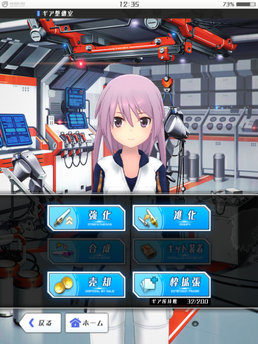 Like most of the storages in the game, you are only allowed to keep 200 equipments. (You can use Carat to expand your equipments storage, however) Modifying or leveling up weapons takes a lot of gold, so make sure you have tons of gold ready. You can also lock equipments to make sure they won't get scrapped accidentaly when scrapping.

Since you cannot get Carat without spending real money, people who don't want to pay have to deal with only 200 equipment slots all the times, here's some advices for those people: 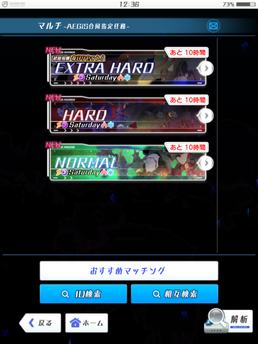 Multiplayer is a feature in Alice Gear Aegis where players from all over the world can fight against bosses in real time and get rewards for clearing maps. You needed to clear the Story Mission 13 first before you can access this feature.

The feature can be access by tapping the second button at the bottom of the screen in the office room. Each map bosses changes their elements each day and it's recommended to use the same actress and equipment element against it for attack bonuses. The higher the difficulty of the map, the higher chance to get a better rewards.

To join multiplayer battles you have to create or join a room to play with other players. Rewards come in the form of Shells that can be used in the Shell Analysis room. The difficutly ranges from Normal to Extra Hard. It is recommended that you must have high leveled actresses and equipments when playing so. 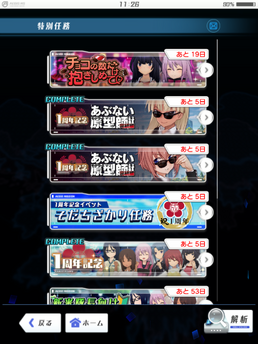 Events are time-based missions only available at a period of time. These mostly happen in the game once and will never appear again in the future.

Every month, a new event is added for players to challenge in. The survey event hex maps mostly has very hard enemies and has higher rewards than normal survey hex mode in Single Player. There are also multiplayer event missions depending on the event, however it mostly gives medals instead of shells.

Each event has its time-based gacha roll, and medal shops. Event hex maps will net you around 200,000 Anima and golds, especially rainbow shells. Completely clearing the hex maps is recommended for the clear bonus rewards. Make sure to not forget about buying the items available on medal shop using the medals obtained in multiplayer event and hex event maps before it disappears. 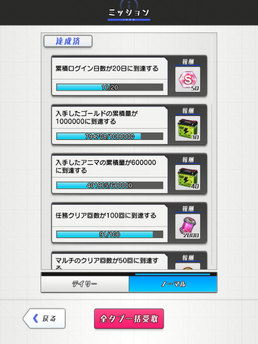 Missions are the maps in the game and is also the tasks inside the game. The word "Mission" can cause a confusion due to the game using this word on other stuffs in the game. (i.e. calling Story Mission, the objective within the map, and Daily Mission "Mission")

The main story contains about 4 chapters and each Story Mission always has 3 objectives that can be completed for rewards. You can also the view mission tasks in the office by clicking the mission button founded in above left of the screen.

In the Single Player event section, there are Quest missions available which also resets daily. Anima, Gold, Battery, Scout Points are currently the only Quest misisons available in the game. It is recommended to clear Quest missions daily as they give a high amount of rewards depending on the quest given to the player. 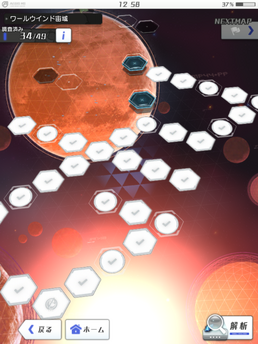 Survey (also called as Hex maps) are the maps that appears in a hex form. Survey maps has better rewards than the main story and mostly used by players to grind resources.

Each battle is called a node and mostly has rewards everytime. There are six kind of nodes, Normal node, Reward node, Danger node, Rare node, Debuff node, and Flag node.

Retrieved from "https://alicegearaegis.fandom.com/wiki/Tutorial:_How_to_Play?oldid=3962"
Community content is available under CC-BY-SA unless otherwise noted.