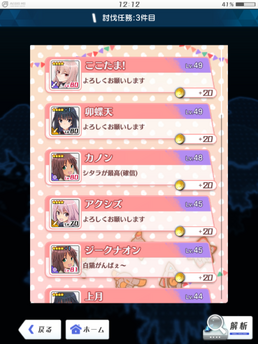 Support are other players actresses that will help you out in battle when you are going to a mission, event and normal surveys. (except multiplayer) You also can choose not to have support by scrolling to the bottom of the list and select the tab with no actress image on it.

There are three types of support that exists in the game, these are designated, player and fixed support (known as npc support). Fixed support or NPC support are mostly seen in story missions (ex. episodes, events, etc) and these are supports that were picked by the game and are locked in the mission and cant be changed.

Using a player support will gives that player 20 golds, while using friend supports will gives your friend 100 golds instead. In battle, to activate the support, you needed to tap the actress icon represent your support at the middle left of the screen. (above your team's icons)

Unlike switching your actress during battles, it will summon the support actress and helps you for a certain of time instead. They will use their special skill always at the end when their time runs out.

You can set your support by going to menu and clicking set support as seen in the image below. While you can only set an actress as support if you obtained them in your account. (https://imgur.com/a/KouITjq)

While in-game combat, support can be called by tapping the supporter icon on the left of your screen. They can last long for 20 seconds and has a cooldown of 15 seconds before they are able to be used again. They are only canceled when the time runs out, or withdrawed.

Supporters are invincible and cant lose any HP, but if they are blown away by the enemy they will stop for a little amount of time and go back in battle again. Since they always have their HP at 100%, support actresses will always have their passive.

They can also shoot the enemy even when they are outside the range. Unlike the player, support actresses always have their SP skill gauge at maximum making them always use it every call.

Retrieved from "https://alicegearaegis.fandom.com/wiki/Support?oldid=3219"
Community content is available under CC-BY-SA unless otherwise noted.