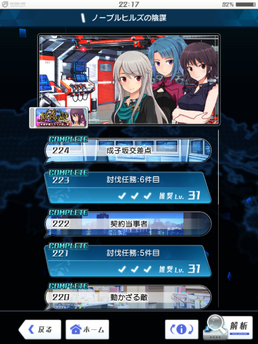 Story is a part of the Alice Gear Aegis universe and is only played solo. It can be accessed by clicking the single player button found on office room in the first place and clicking the button story mode.

Story mode consists of 4 seasons and episodes each season. Unlike survey mode, story mode has missions or tasks that the player has to do to gain rewards when completed.

Although, story mode has only limited missions unlike survey mode that has infinite nodes and maps to clear. There are currently about 300+ story missions as currently for now.

Reminders for story mode that is listed below are:

Retrieved from "https://alicegearaegis.fandom.com/wiki/Story?oldid=3912"
Community content is available under CC-BY-SA unless otherwise noted.