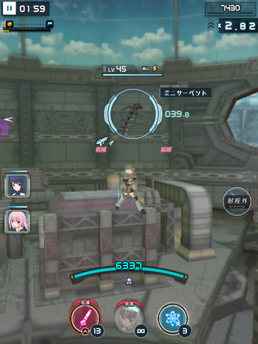 Combat is one of the most basic mechanic in the game. The screen will be always shown in third person view while you controlling your character.

There are five ways to attack the enemy, you can shoot them up using your weapons, use skills to buff yourselves or to kill multiple enemies at once, slice them with melee, eliminate them completely using your SP, or lastly call support actresses to do the job.

While on combat, when you damage or kill an enemy, you gain damage bonuses which can be seen on top of the screen. This can go up from 0% to 9.99%.

Getting hitted by an enemy bullet will decrease your damage bonus and makes your actress damage lower. Using skills in destroying enemies also raises up the bonus.

It's mostly impossible for players to keep their damage bonus on max when fighting bosses as they tend to hit your character a lot with their bullets which are hard to dodge completely.

These are player given guides or information that might help you out in while in combat.

Retrieved from "https://alicegearaegis.fandom.com/wiki/Combat?oldid=3629"
Community content is available under CC-BY-SA unless otherwise noted.